Some quick reflections on 2013   ( 2012 , 2011, 2010, 2009, 2008  etc ) . A lot of this year has been spent trying to push on with the new while getting bits of the system to understand and hold on to the best bits of some of our legacy projects. In everything it is all about communication at all levels. If anything the ever increasing flow of great ideas across education just highlights more how structures and hierarchies need to change to become much more open.  We are still trying to do the same things with new technology plugged in - we are not yet confident enough to really use it to fundamentally change how we do things for learners - and this needs system change and open minds across the educational system.

This year started with an interview for the Times Educational Supplement talking about some of the big changes that are coming and then filled out with usual range of practical projects to support learners.

1. International Articulation work took me to Istanbul and some other exciting places. The work here helps students doing HND and other awards move around the world and cements the international value of our qualifications for Scottish learners. This will open up the doors of more European institutions to Scottish learners  in the coming year.

2. We spent some time looking at the appetite of colleges , schools and training providers in Scotland for more support in direct delivery to learners . There will probably be more developments too here next year
With common units across Scotland there is so much more we could be doing collaboratively in schools , further education and into the workplace - there is huge potential for much greater flexibility for learners.

3. Open Badges .. and finally .. after almost two years of pushing policy changes through system we were able to say some sensible level headed things about the benefits of open badges . I think many folks are just beginning to understand the potential here for learners and there are still some challenges too to be ironed out around display etc

4. Open Educational Resources . Have to thank the on-going support of JISC , ALT , CETIS , RSC Scotland , College Development Network  and many others for helping to open up the policy debate around open educational resources in Scotland . ( It should not be a debate - we should have some national policies here) Special thanks to Lorna Campbell  of Cetis for going  extra mile on this.
We have made some tangible progress . The Open Scotland event was very successful and we suceeded in getting all the right agencies along and engagement from policy makers . Please follow the blog and join ALT and the join our Scottish sig .  I will be moving this debate on again in coming year supporting organisation of both ALT-C 2014 and OER14

5. I usually get to meet most of the folks with interesting content or ideas for education - this year a lot of these meetings were with different groups trying to get more programming into schools one way or another - robots , gamification , computational thinking . All good stuff but was clearly the year of computing panic across UK . I hope for sake of learners and teachers this gets more coherent next year. At qualifications end the new national 4 and 5 awards in computer science should be able to embed most of this - badges and some other developments should help further down schools.

6. In the evenings and quite a lot of evenings this year I played my part in merging three Glasgow colleges to become Glasgow Clyde College. I am currently chair of the college's learning and teaching committee - having been through the pain of merger and of  regionalisation, next year we will all be looking for the dividends that the new regional structures should give Colleges across Scotland.

And looking on across next year - Early in the new year folks will come to realise how useful the new Glow with Microsoft 365 built in will be for teachers and learners.  In the spring there will be more active debate and finally some action around digital participation across Scotland. By summer the new National 4 and 5 qualifications will be in place for all learners across Scotland . In the autumn and beyond we will see if all the work done to support volunteers , stewarding , security , broadcasting , catering , customer care and more for the Commonwealth Games  Glasgow 2014 delivers the legacy it promises and we will too find out where Scotland's destiny lies

Over year too I expect to see more coherent attempts by a range of agencies to open up data in Scotland in a way where learners can finally track their own learner journey and they can see potential value of different courses in supporting their journey.

Some observations on my own use of technology this year

Blogging less and less and using twitter more and more
I miss Google Reader , found Digg Reader as replacement but use it less that I thought
Probably picking up more info from Twitter than from RSS Feeds ?
I like my tablet for consuming information and taking notes in meetings .
But I still need a computer -lap-top or desktop to be really productive
I bid farewell to my corporate blackberry and hello to a new shiny Sony Xperia and apologies to all who keep getting twitter invitations  and reminders to join me on twitter from my new phone - still haven't figured out how to switch these off

Finally thanks to my team and all those in SQA for continuing to support me and give me the opportunity to explore new ventures . Thanks too to all of you and all the folks in my broader personal learning network across Scotland , UK and beyond for all the great ideas and support over the year. 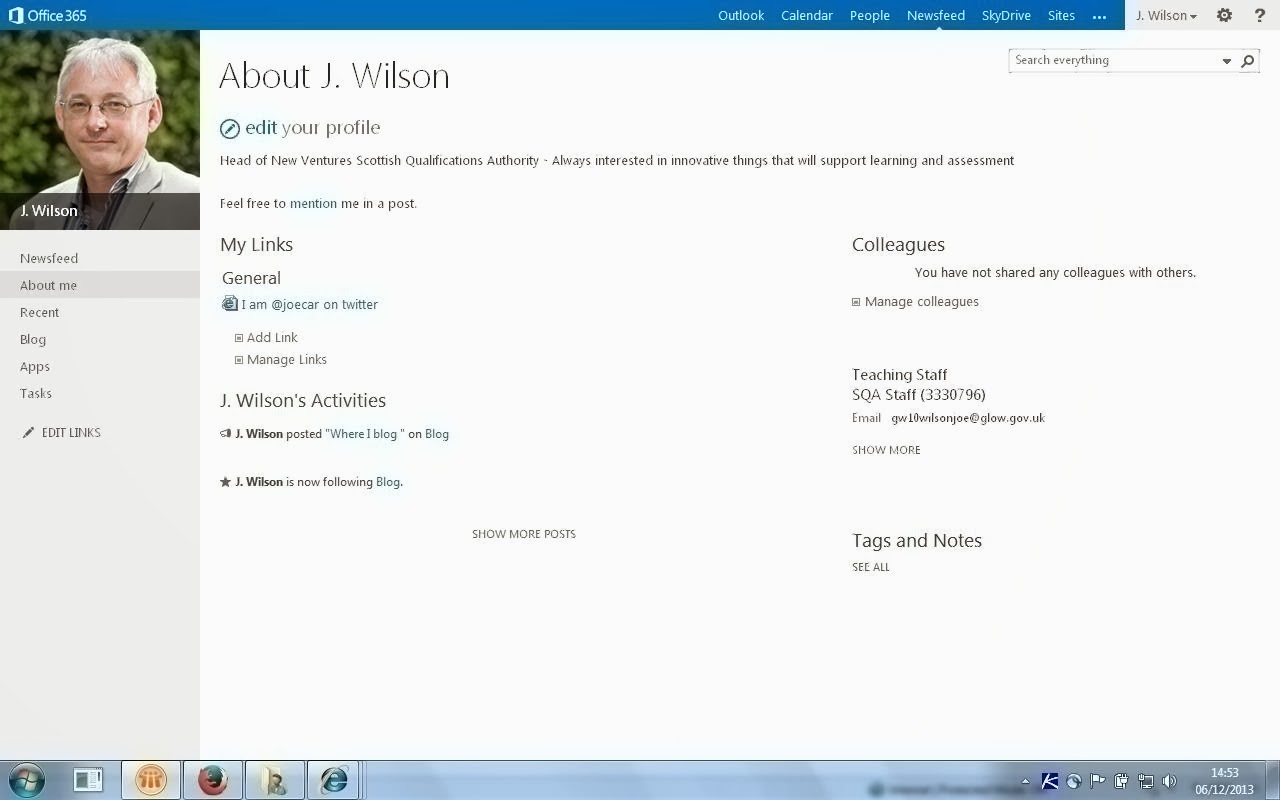 Just had a poke about new look Glow now with added Microsoft365
This is looking like the amazing platform - that Glow always had potential to become
Well done folks !