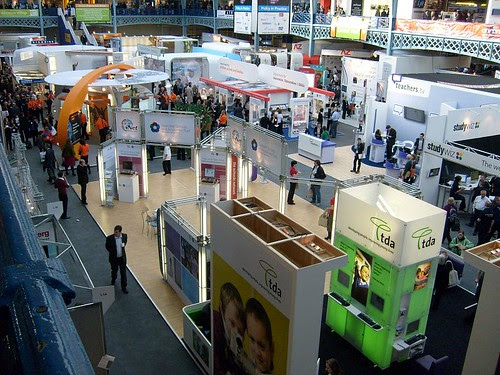 I attended this with Bobby Elliott Qualifications Manager for Computing . We use this event as an opportunity to meet many of the senior US based managers of our vendor partners. We had some really useful meetings with Adobe and Microsoft and some others including some other awarding bodies and Financial Institutions as I was in the hood. A search for BETT 2008 Blog will turn up multiple reviews of this event.

While we spent most of our time in meetings here are some observations on the event. The audience for this event is schools and ICT advisors from English local authorities with a growing international presence - overseas teachers and ICT advisors. It is a larger version of Scottish SETT now the Scottish Learning Festival. Great to see Martin Jack ex LTScotland organising chunk of this as he successfully does for Scottish Learning Festival.

The Ministerial key note was message that schools in England are to give parents access to electronic reports both on progress and attendance. There were number of organisations present trying to sell systems like this to local authorities on the back of this announcement. Moving around stands many of them were devoted to School or local authority admin systems rather than teaching and learning. There were some organisations offering totally externally hosted admin and learning and teaching platforms - some very clever stuff. The Pupils have equivalent of very large data stick flash drive with their own files on this and it connects in school and at home to the remotely hosted services and software. This was probably main innovation I saw but I didn't see the price tag.

MIAP was being heavily promoted - through presentations and on stands. The new 14-18 Diplomas were too - The Scottish Candidate Number and Skills for Work are ahead of these projects in Scotland. But would be taken as whinging Jock to state this anywhere south of border.

Only thing I would have liked to play with was probably the Asus EePC / RM Minibook which is well reviewed well here by John Connell and Learning and Teaching Scotland.

Met with many colleagues and friends from over the years - but have to say there was not as much innovative stuff about as say five years ago. Mostly more of the same - real message may be in how offerings are joining up or being bought up.

On many fronts there was strong evidence of partnership working across suppliers of qualifications, electronic learning materials and more traditional text books and everywhere the slickest of marketing - interactive presentations , live demonstrations of web- based resources, on-line tests and much more. I know we do things differently in Scotland but we would do well to make more links with private and public sector partners around qualifications. It was good to meet Colleagues from LTScotland and Learndirect Scotland at event.

Sorry that we missed Teachmeet on Friday Night - looks like it was a great success. But not the best night even for this hardened traveller with two kids under five an extra Friday night in London just takes too many brownie points. You can catch it here on flash meeting if you have a look around at http://www.teachmeet.org.uk/

And we didn't win Bett Award for the Sports Store Game - but being shortlisted was some achievement real achievement is fantastic reception the game has had across Scotland and beyond,

I took some photographs of event. Incidentally camera was giveaway from the Pearson stand - given away as I sat through a presentation on their School Admin Software. Came in handy and I uploaded them on way back up road http://www.flickr.com/photos/joecar/ Would be good to have central Scottish repository for some of this stuff.
Posted by Joe Wilson at 1/20/2008 01:52:00 am