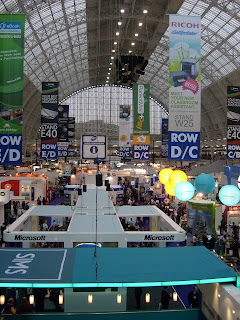 I've been really lucky and very privileged to attend BETT the British Educatonal Technology Show for last 12 years either in my current role or in previous jobs. The picture above is of the main hall and the interesting thing is if you have a look at shots over last 12 years  ( probably last three here on flickr) remarkably it  has not changed that much both in terms of who is there and in terms of the solutions being peddled to an educational audience. As usual for me it is the side meetings with partners that matter. Anyway first impressions from day one
For those who don't regard education and learning as chiefly a money making enterprise BETT can be pretty harrowing. For a free pen or even a pendrive  there is only so much sales patter you can stomach. Combine lots of people selling stuff with hordes too of home grown or international educational technologists all on the make  and you get a heady brew and has any of it really changed the experience of learners in schools ?
Posted by Joe Wilson at 1/13/2011 10:20:00 am