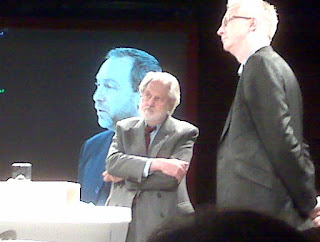 Lord Putnam and Jimmy Wales founder of Wikipedia debate in final session at Learning Without Frontiers.

I had a productive two days at Learning Without Frontiers and well done Graham and team for organising an event with a difference in a useful calendar slot before the purgatory of BETT.  The speakers were awesome , entertaining and informative and looking forward already to watching them be re-streamed and appearing on i-tunes and YouTube soon ( guess announcement will appear here)
I had some prejudices before I came - this was a relatively expensive event - and a free/discounted  i-pad was on offer if I signed some dotted line ( I'd love too but as attending is as part of my normal day job I can't pick up technology like this) . While I am slightly covetous I still can't figure out how owning one will help my day job. Did appear to be bigger version of i-phone for too wealthy short sighted guys ( guess they haven't worked out that it can't phone yet) sort of techno porn for geeks.
I did enjoy the best wifi I have had at a conference out with trips to States ..and so did everyone else - there is a fairly impressive twitter stream #lwf11 and was great too to find some friends picking up video feed from conference as it went out live.
So how could it be made better - event needs more back channels - a live twitter stream behind and beside presenters. - needs some more unconference stuff - there were some really great people in audience a few five minute slots from a few of them would have been really good. The event was about disruptive education - still not disruptive enough - one or two presentations were corporate advertorial.  Would have been interesting to have some input from open educational resource producers. A hook up somewhere with JISC in UK too would be really constructive - slight danger that it becomes schools silo.
Special tribute to David Muir who managed to do a blog posting on every session he attended.
Posted by Joe Wilson at 1/12/2011 04:09:00 pm