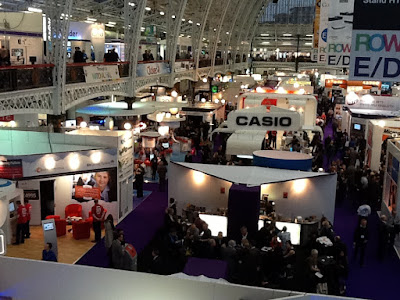 Lots of people can and do spend a lot of time slagging off the BETT Show but it is the one week in year where you  get the sense in the UK that learning technology has a full part to play in the future of learning.

It can be really hectic but it is always a privilege to attend and critical I think that anyone who gets to attend shares things with the broader learning community. There are a few learning 'consultants' who top up on their jargon this week and will drip feed it to their clients for the rest of the year.  I think "flipped classroom" will be the term  for Bullshit Bingo this year.  ( not knocking theory but those who will mouth it emptily in the coming year )

The event was a lot busier than last year both on exhibitor and it felt on attendee front.  Some folks said rightly that last year had a poor turn out because of the weather but it still felt busier than last two previous years.  Good too to  meet up with both Education Scotland and Scottish Government at the  event - it is really critical we make the most of events like BETT both for information gathering and on promoting the best of Scottish Education.

I'll do a few posts  to summarise my BETT experience. There were lots of great links and interesting topics flying around on twitter I hope some of these streams will be archived.

#EWF,  #ELB2012  , #ATC21S I think lots of folk are unaware that BESA now helps organise an Education World Forum on the Monday and Tuesday before BETT started.  There are quite a few useful snippets in the feed from this  http://www.ewf2012.org/  , Microsoft's Education Leaders Briefing  and one to have a look at the assessment and teaching of 21st century skills programme http://atc21s.org/ which we at SQA have been engaged with from inception.

#bett12 #BETT_Show,  #bett2012   - I wish that the official BETT Tag did not have an underscore in it . I don't know who came up with that idea but hopefully one that changes next year.

#mmafa  The Miranda Mod  Unconference and some excellent sessions http://www.mirandanet.ac.uk/bett/

#C84C  Collaborate for Change a useful new additional fringe event on Thursday evening some lively discussion from vendors and ICT support people http://www.c84c.org.uk/   Looks too that it has a format that can sustain large conference numbers.

#tmbett2012 The one and only - but I'm still not able to hang about until Friday and I am still not sure that teachmeets work when you get 200 folk in one room. But it looked good as ever http://teachmeet.pbworks.com/w/page/48562279/Teachmeet%20%40BETT%202012  and its still critical to have this kind of informal , informative , networking event for teachers at BETT. I'd still like to be able to offer some  no strings sponsorship for  this but I am not quite sure what is happening on this one. Delighted too that John Johnstone has been nominated for a NAACE award for impact of teachmeets http://www.johnjohnston.info/blog/?e=2245 I am sure lots of folk from across UK and beyond will want to help John get his portfolio together.